In 2021 the prime property market in the Marbella area enjoyed a significant rebound from the 2020 slump. Official figures for transaction volumes last year within the Golden Triangle, when combined with 2020 and compared to 2019, suggest this was largely a result of pent-up demand. However, average transaction values rose significantly over the past 16 months, something echoed by a number of estate agencies in the Marbella areas reporting record years in terms of sales turnover. There were 5 million new millionaires created globally in 2021, so the rich are getting richer, and this is reflected in the value of the properties they are buying. Buyers of luxury properties continue to get younger. We are also seeing better-qualified buyers, with much of the property research process now taking place remotely in advance of a physical visit. This has been the usual modus operandi when searching for property even before pandemic times, the difference now being that remote viewings have almost become normal. This means fewer in-person property viewings and a buying process that has sped up.

We’ve seen this trend continue during the first quarter of 2022, with a knock-on effect of dwindling supply of key ready properties in prime locations producing significant price increases and a search for suitable properties in neighbouring locations.

Although we feel that the pent-up demand has now largely been satisfied, we expect demand for the high end of the market to continue going strong for the foreseeable future, albeit at a less frantic pace than last year.

So what has been driving demand?

Sales transaction volume in the Golden Triangle – the name colloquially given to the area comprising the municipalities of Marbella, Estepona and Benahavis – practically halved during the height of the Pandemic in 2020.

According to figures from Spain’s Public Works Ministry (Fomento), this pent-up demand was satisfied in 2021, especially during the last three quarters of the year as travel restrictions were lifted worldwide.

However, as figures in the following graph reflect, the volume of sales for 2021 and 2020 combined average out to a similar volume seen in 2019, perhaps with a slightly better performance from Estepona.

Given that many agencies which operate in the Golden Triangle reported record years in terms of sales, generally saying it is not just pent-up demand, this leads us to believe that what was experienced was an across-the-board increase in average transaction values in the higher end of the real estate market.

This was supported by news of record sales figures in super-prime areas such as La Zagaleta in Benahavis, as well as record prices per square metre being achieved in the sales of apartments and penthouses in iconic resorts such as Puente Romano in Marbella’s Golden Mile. In 2021, 10.8% of all properties sold in Spain were sold to foreign nationals. This is a decrease of half a per cent against the previous year and represents the fifth consecutive year of decreases since the 2016 peak when foreign buyers amounted to 13.25% of the total. British buyers were the most active with 11.01% of all foreign buyers in 2021, followed by the Germans (9.59%) and the French (7.62%).

Although the top 3 are very much in line with historical splits, it is important to note that in the early part of 2021, the Germans took the top spot ahead of the British, mainly attributed to extended travel restrictions in the UK, compared to other countries.

“The percentage of purchases by foreigners rose further to 13.17% (164,299 sales transactions) of the total during the first quarter of 2022, official figures show”.

Foreign buyers in the region of Andalusia represented 11.48% of all transactions, practically the same as in the previous year. In parts of the region nearer the coast which are popular with tourists, the percentages of non-resident foreign buyers are much higher than the regional average.

In Andalusia, British account for 16.7% of total purchases by foreign nationals, with the Swedes in second place with 10.28%.

In the first quarter of 2022 the percentage of foreign buyers in Andalusia rose to 15.14% of the total.

During 2021 in Málaga Province – where the Costa del Sol is located – more than a quarter (27.36%) of residential property sales were to foreigners. This represented a slight drop (0.83%) from the previous year. This number rose further to 33.7% in the first quarter of 2022, official figures show. Locally, based on our own transactions data for the Marbella, Benahavis and Estepona area, property purchases by foreigners immensely surpasses that of Spanish buyers. During 2021 we saw an increase in searches from most nations with significant increases seen from Sweden, Belgium, Switzerland and Poland. In the cases of Belgium and Poland in particular, this increased interest was also reflected in year-on-year increases in the number of enquiries received.

In the first quarter of 2022 the website experienced a drop in visitor traffic across the board compared to the same period of 2021 which we attribute to both a better-than-normal 2021, as well as the effects of the Ukraine conflict which started in February, but has picked up since and back to usual levels.

Areas where we expect to see growing demand:

What 1 Million € gets you

Comparative values in the Golden Triangle (Marbella, Estepona, Benahavís)
How many square metres of prime property does 1.000.000€ buy you in: These are the current customer trends our team has identified:

The branded residences sector has grown rapidly, particularly over the past 20 years, with more than 400 across the globe, the majority of which are hotel-branded. In response to increasing demand for branded residences in the last four years, Marbella has become the destination for several very exciting luxury hotel and private residence projects.

Services and amenities are the top motives behind the purchase of a branded residence, according to Knight Frank Global Buyer’s Survey 2021.

There are projects underway in the Marbella area associated with renowned hotel brands such as The Four Seasons, W Hotel, Club Med Group, Hilton, as well as designers Fendi Casa, and the planned Karl Lagerfeld residences, among others. 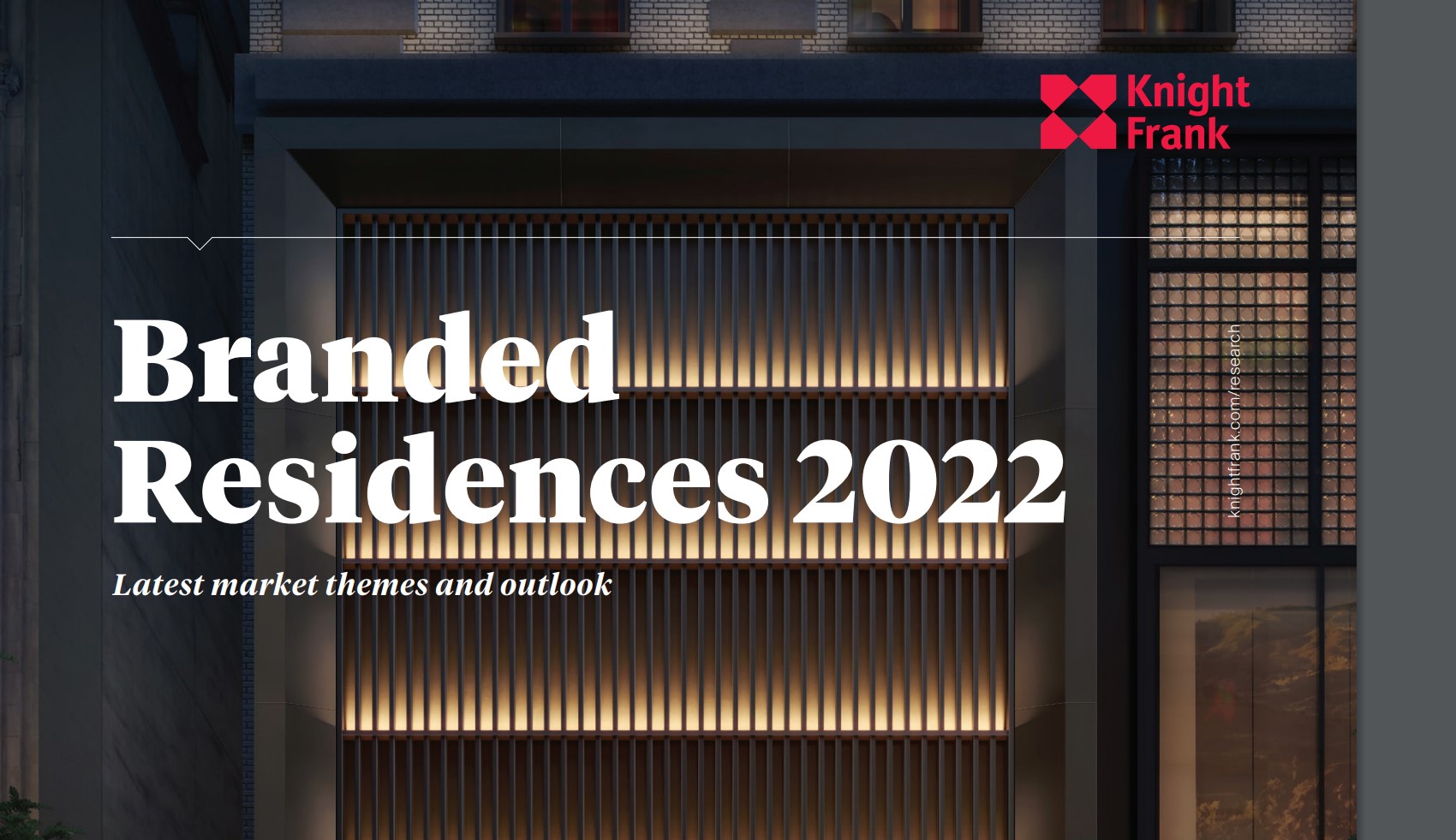 The concept of Biophilic design in residential architecture has become a concept very much on trend in the past year. Biophilia is the love of all things living or nature and with this in mind biophilic architecture aims to bring together the residents of a home with its natural surroundings. People’s longing or craving for nature and open spaces was heightened by the pandemic and while last year we saw a distinct change in the types of properties buyers wanted, gravitating towards larger more spacious homes, we have also seen a demand for recreating natural environments within the inside of a home. Mental health awareness has become of utmost importance during the last two years and biophilic architecture aims at mimicking natural environments at home to impact positively on one’s emotional well-being.

It is with the above in mind that there is a growing demand for home designs to purposely include: Luxury homes became the asset class of choice for UHNWIs. In 2020, housing markets ceased trading for months at a time, freezing like a deer in the headlights. But come 2021 they started to race away as vaccine rollouts gathered momentum and the uncertain global economic climate started to recede.

The value of the Knight Frank Prime International Residential Index (PIRI 100) increased by 8.4% in 2021, up from just under 2% in 2020 and its highest annual increase since the index was launched in 2008.

Of the 100 luxury residential markets tracked, only seven saw prices decline in 2021 while a staggering 35% of locations saw them increase by 10% or more, underlining the strength of the sellers’ market during the pandemic.

The outlook for our markets is of little relative importance compared with the unfolding humanitarian disaster in Ukraine.

However, given the current crisis, we need to be aware of rising risks. Alongside the growing geopolitical turmoil in Europe, Covid-19 continues to present challenges, inflation is a growing concern, wealth inequality continues to rise, and environmental issues require firm action. Clear insight is needed now more than ever.

Globally, pandemic-related restrictions and lifestyle shifts have led to amassed savings and an increase in levels of wealth that has not been seen for years.

The world’s population of UHNWIs (those with net assets of US$30 million or more, including their primary residence) rose by 9.3% in 2021, following on from growth of 2.4% in 2020. This is reflected in the results of Knight Frank’s Attitudes Survey: 82% of respondents (wealth advisors and private bankers) said their clients’ wealth had increased in 2021.

The savings amassed during 2020 have enabled significant investment upside over the past 12 months.

Access to technology and the digital democratisation of investments, including private equity, have led to greater levels of wealth creation and growth.

Asset price rises, from property markets to stock markets to luxury collectibles, have all helped to boost the fortunes of those wealthy enough to hold investment portfolios.

Knight Frank’s Attitudes Survey reveals that, on average, just shy of two-thirds of UHNWI wealth is allocated to property. Just under a third of total wealth is held in principal and second homes, while the remainder is invested directly or indirectly (through real estate investment trusts (REITs), for example) into investment property.

The ongoing war in Ukraine is having consequences on the global economy with an announced recession that casts a shadow over those very optimistic forecasts.

In recent years Marbella has undergone a significant transformation. Little is left of the tourist destination once limited to where European golfers would flock in the colder months to enjoy the winter sun and leisure time. The combination of technological advances and being able to work from home most of the time has gradually helped Marbella evolve into the home for numerous families, mostly from Northern Europe, who have migrated to the Costa del Sol to take advantage of Marbella’s sound infrastructure and quality international schools. This change, which began almost a decade ago, has transformed the town and increased the number of activities available for a younger age group, resulting in an overall improvement in the gastronomic, cultural and sporting offerings.

Real estate has been one of the sectors that have experienced unprecedented growth, especially post Covid. Construction has reached a level of sophistication that places Marbella on a par with its European Mediterranean counterparts, with projects such as Epic Marbella by Fendi Casa proving a commercial success, and spearheading the arrival of Four Seasons and Karl Lagerfeld Villas among other internationally renowned brands.

Marbella has become one of the fastest-growing and most sought-after luxury destinations in Europe, which is set to remain this way for the foreseeable future.